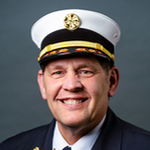 Chief Danny Hagen began his fire service career in 1978 as a Paid On-Call Firefighter with the City of Eastpointe, MI. He became a full-time firefighter in 1980, advancing to Fire Marshal in 1992 and Fire Chief in1994. He served in the chief’s position until his retirement from Eastpointe in 2010. In August of 2016, he was appointed Fire Chief for the Hamtramck Fire Department, the first outside chief in its 100+ years history. Hamtramck is a small city, 2.1 square miles with a dense and diverse population of 23,000 with 26 different languages; it is also surrounded by the City of Detroit.

Chief Hagen has been a member of the IAFC since 1992 and served on the first Fire Prevention Committee. He is a past president of both the Macomb County Association of Fire Chiefs and the Southeast Michigan Association of Fire Chiefs. He has served on many fire-related committees locally, regionally, states and internationally. Additionally, from 2008-18 he served on the Michigan -1 Disaster Medical System team (associated with the National Disaster Medical System), the last 5 years as the Acting Logistics Chief.

He holds an Associate of Science degree in Fire Science from Macomb County Community College and a Bachelor of Science in Public Safety Studies. He attended the Nation Staff & Command School and various courses at NFA. He and his wife, Mary, have two grown children and they enjoy traveling around the county and internationally.