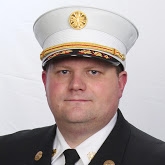 Nathaniel J. Melby is the Fire Chief of the Town of Campbell Fire Department, Past President of the Wisconsin State Fire Chiefs Association, and President of the La Crosse County Fire Officers Association (MABAS Division 134). A 23-year veteran of CFD, Chief Melby has been the Fire Chief since 2009. He was awarded the Chief Fire Officer (CFO) designation from the Center for Public Safety Excellence in 2011. He works full-time in business as the Chief Information Officer for Dairyland Power and has taught as a business faculty member for several universities at undergraduate and graduate levels in the areas of Information Security, Risk Management, Management Science, and Technology. His writing has been featured in many fire service publications including Fire Rescue Magazine, Fire Engineering, Firefighter Nation, and Wisconsin Fire Chief Magazine. He has also been published in several international journals, conferences, and magazines. Chief Melby has a B.S. from the University of Wisconsin-La Crosse, an MBA from the University of Wisconsin-Whitewater, and a Ph.D. in Information Systems from Nova Southeastern University’s College of Engineering and Computing.